Skip to content
By Alan Chenkin, Learned about celebrities reading magazines at the supermarket checkout
When Hollywood makes a documentary, it is usually portrayed “somewhat” accurately – but if it is a movie “based on real events”, liberties may be taken to make the film more marketable and appealing to the target audiences.
In addition, the actual historic locations may have been updated or changed, so that the producers have to come up with a facsimile or alternative site for shooting parts of the film.  If you watch Charleton Heston as Moses in “The Ten Commandments” movie, many liberties were taken in “re-creating” ancient Egypt for the movie.
From the Web:
Opinion | History According to Hollywood – NY Times
On Rights and Accuracy in Movies – The Illusion of More – The Illusion of More
Report reveals accuracy of Hollywood’s real-life movies – Daily Mail UK

Amazon.com: The Business Of Documentary Filmmaking eBook: Claudia Babirat, Lloyd Spencer Davis: Kindle Store
Keep in mind this is just my opinion, many of the directors and writers don’t have direct experience with the subject, due to age, distance, or lack of available information – which forces them to take artistic liberties with a story.
For an example, “Saving Private Ryan” had a lot of consultants (many veterans) for the recreation of the wartime scenes; some veterans were moved to tears from the reality of the D-Day landing on Normandy beach.
‘Ryan’ Ends Vets’ Years of Silence
The Department of Veterans Affairs had to set up a helpline for Vets who had been upset by the film 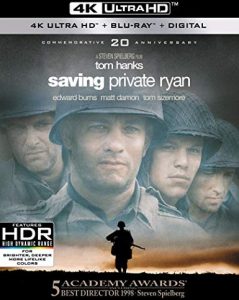 Saving Private Ryan, D-Day at Normandy Beach (Movie from Amazon)
The fighting scenes were so real, that (IMHO), they overshadowed the story.  Hanks and Spielberg also collaborated on the WWII Museum in New Orleans, which also has a “Hollywood” touch, but is true to its mission.  (I have visited the museum and can vouch for its realistic feel.  If you go, see the movie they show first).
At best, Hollywood can only recreate a series of events.  Even with historians and written records, the lack of actual first-hand accounts and items lost to time, or worn out, make it necessary for the production company to improvise.  If that fits with the story, and it feels “real”, we can usually forgive some artistic license.
Thanks for reading my Blog!  Feel free to like, upvote, share and repost!
Edited and expanded from my answer on Quora.
Last Word: