Paparazzi are a part of the entertainment business.

The nature of their work is to acquire images of celebrities that will sell newspapers or go viral on the internet. You can count on them to go beyond the limits of ethical behavior and intrude AS MUCH AS THEY CAN GET AWAY WITH. The excesses of this are the sad result of Princess Diana’s death, where the Paparazzi both contributed to the car chase that took her life, and then took pictures of her as she died. Not to mention the intentional goading of celebrities to anger or provoke a situation that will get more pictures and notoriety for the photographer and/or the celebrity (although it can be negative, ask Alec Baldwin).

Sharp celebrities (and their managers/handlers) know how to effectively use and manage the paparazzi, granting them photo opportunities and giving them enough shots to satisfy their need for ongoing celebrity and sell pictures. George Clooney is really good at this, as are many other celebs. (NOTE: Despite maintaining that his private life is “off limits”, Clooney recently threatened legal action for unauthorized family pictures, even referencing The Late Princess Diana in a recent appearance).

The best way to look at this, in my opinion, is that the paparazzi are doing a job, and some do it well (and are respected photographers), and some are stooges who use any means necessary to get celebrity pictures even if it violates the celeb’s right to privacy or the limits of ethical behavior.

The bigger problem is that there is a large audience for pictures of celebrities that are salacious, unattractive (sans makeup), in awkward or everyday situations, and generally in poor taste. The tabloids fuel the audience with headlines, unauthorized photo spreads, and teaser articles that are provocative and a result of pictorial “misinterpretation”. Note everything about the paparazzi is evil, see this article” Driving Mr. Kanye and 7 Other Times Celebrities and the Paparazzi Almost Got Along”.

My thoughts are these; the Paparazzi are part of an indelicate ballet, with the public, the celebrities, the tabloids, fame, and fortune. Many aspiring celebrity “wannabees” NEED the paparazzi to follow and pursue them when they are climbing the ladder to success, and exposure means better roles and opportunities. Once they have some measure of fame, they turn on the paparazzi as “evil scum” who destroy their privacy. The people who manage that well, and have good public relations people and agents will figure it out. The celebrities who become known for their anger and hostility towards paparazzi become curiosities for the public’s digestion, and may have short lived but volatile press during their 15 minutes of fame.

Here is a suggestion; be kind to your fans and paparazzi, or your photos will be wrapping fish at the docks.

By Alan Chenkin, Learned about celebrities by reading the tabloids in the checkout aisle.
First of all, Famous people (aka Celebrities) don’t all date famous people. We hear more about celebrities dating each other when their publicists and the media and the paparazzi cover their dating habits. Many well known people work hard at keeping their private lives private, especially their personal relationships.  Here are some links that go both ways on this topic:
Amazon.com: Celebrities Dating Advice eBook: David Clark: Books
32 Celebrities Who Married Normal People – Huffington Post
Celebrities Who Date Non-Famous People – PopCrush
Hiding Out in Hollywood (A Hollywood Dating Story Series) – Kindle edition by Jennifer Farwell. Literature & Fiction Kindle eBooks @ Amazon.com.
The biggest celebrity hook-ups of 2017 – Glamour Magazine
Celebrity Couples – Which Stars Are Dating Each Other – Refinery 29
11 Times Celebrities Married Normal People – Vogue
Celebrities Who Date Non-Famous People – PopCrush 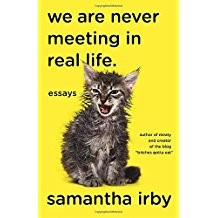 We Are Never Meeting in Real Life.: Essays – Amazon Books
25 Tips When Dating a Celebrity – Amazon
It is usually more stressful on the non-celebrity who is dating a celebrity; they sometimes have a lot of difficulty adapting to the onslaught of press and paparazzi – and may have friends gossiping about them to the tabloids!
I hope your eyes have been opened on this, and you look beyond the fleeting fame and see that celebrities have the need for both famous dates and normal lives. Keeping them in perspective, well, that is a challenge.
Thanks for reading my blog!  Feel free to like, upvote, and share.
Edited and expanded  from my answer on Quora.